This is the first major bump of Gatsby since September 2018! We’ve tried to make migration smooth. Please refer to the migration guide and let us know if you encounter any issues when migrating.

If you’re looking for an overview of all breaking changes and how to migrate, please see the migrating from v2 to v3 guide.

Gatsby v2 introduced experimental “Conditional Page Builds” (enabled by GATSBY_EXPERIMENTAL_PAGE_BUILD_ON_DATA_CHANGES environment variable). It had some gotchas and quirks, and it wasn’t ready yet for GA. With Gatsby v3, we improved this feature and activated it by default for everyone! So incremental builds is available in OSS now. This improvement is (re)generating only subset of HTML files that needs to be generated. To be able to use it you will need to keep the .cache and public directories from previous builds.

Take a project powered by Shopify as an example. You have your listing of all products and then individual product pages. When you change one single product, only that page should be rebuilt. In the screenshot below you can see exactly that (the sentence “Hello World” was added to the description): 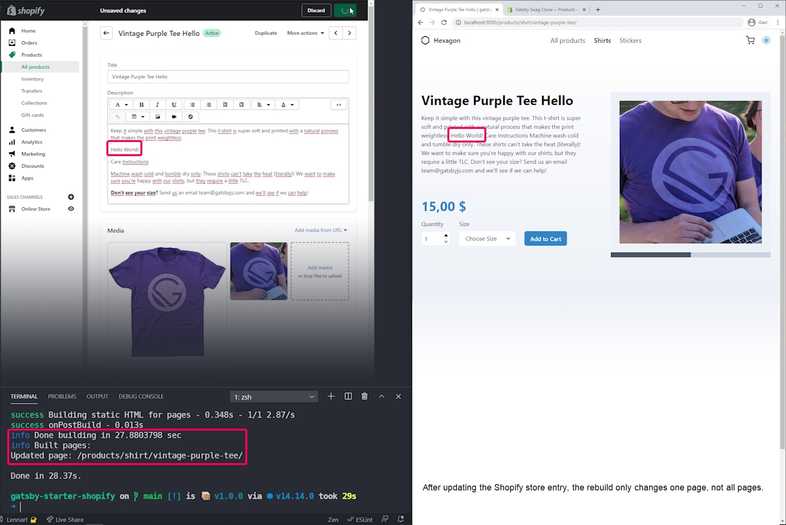 The screenshot is taken from a talk about Gatsby v3 at GatsbyConf. You can view the video showcasing this feature on YouTube.

How does it work?

When those inputs change since the last build, the HTML files are marked to be regenerated. If they don’t change, we can reuse HTML files generated in previous build.

As we mentioned, Gatsby tracks “inputs” used to generate HTML files. However, the gatsby-ssr file allows some arbitrary code execution like using the fs module. For example:

While Gatsby could also track files that are read, the custom code that does those reads might have some special logic that Gatsby is not aware of. In the above example the filename could be generated and changed between builds, or the file read itself could change — so we see this as “arbitrary” file reading. If Gatsby discovers that fs modules are used, it will disable “Incremental Builds”-mode to stay on the safe side (there will be warnings mentioning “unsafe builtin method”).

If your gatsby-ssr (either site itself or plugin) make use of fs reads, head over to migrating from v2 to v3 guide and check how to migrate.

After adding our initial Fast Refresh integration back in November 2020, we worked on it over the last couple of releases. For Gatsby v3 we further improved usability, reliability, and accessibility to make it the default overlay. With this the old react-hot-loader is removed and you can benefit from all the new features it has: Fast Refresh is faster, handles errors better, and preserves state across re-renders.

We built a custom error overlay that aims to give you helpful information to fix your bugs more quickly. It features:

We also added two new ESLint rules inside the default configuration that will warn you against anti-patterns in your code:

Please refer to the webpack release notes for a full list of changes.

What does that mean for your Gatsby site? Gatsby is now able to tree-shake on a page level instead of an app level. You’ll see reductions up to 20% on file size. Users returning to your site will benefit from the improved hashing algorithms as unchanged files will be loaded from the browser cache.

We’ve tried to protect you from the burden of manual webpack migration, but if you are using a custom webpack config or community plugins that do not support webpack 5 yet, you may find the webpack migration guide useful.

Please refer to React’s own release notes for a full list of changes.

The minimum version of Gatsby is now 16.9.0 to support Fast Refresh, React Hooks, and Suspense by default. We’ve also made sure we’re 100% compatible with React 17. To use the new React JSX transform have a look at the babel-preset-gatsby section below.

With this change, we’ll be adding more experiments to support Concurrent mode and React Server Components in future releases.

Please refer to graphql-js’s own release notes for a full list of changes.

With this upgrade we can finally leverage interface inheritance for queryable interfaces. You no longer need to use @nodeInterface directive in schema customization:

Please refer to eslint’s own migration guide to update your custom ESLint files.

If you rely on Gatsby’s default ESLint configuration, you should have a smooth transition. We upgraded the underlying rules, so you might get some new warnings/errors.

Gatsby no longer uses the deprecated eslint-loader. We’ve moved to eslint-webpack-plugin. By using the plugin, behaviour has changed a little bit, as warnings and errors are displayed later than in version 2.

This release includes a new plugin, gatsby-plugin-image, replacing the old gatsby-image plugin. Built from the ground up for speed and best practices, it’s the most performant way to use images in React. If you saw your scores drop with recent Lighthouse updates, migrating to this plugin should help you get top scores again. It comes with a new, simplified GraphQL API (no more fragments), as well as a new StaticImage component that’s as easy to use as an <img> tag.

The GatsbyImage component supports three responsive layout types, as shown in the video below.

There is a codemod available to help migrate from gatsby-image. Support is included in all sources that use childImageSharp, as well as out of the box support in several CMS plugins, with more coming soon.

The originally published version of renewed gatsby-source-wordpress is 4.0.0. It is fully compatible with Gatsby v2.

Gatsby Cloud now includes Hosting for all your Gatsby projects. gatsby-plugin-gatsby-cloud is a new plugin that you need to install when using Gatsby Cloud Hosting. It generates redirects and rewrites for your client side routes automatically and even allows you to set custom Headers on a per-file basis.

Read more about gatsby-plugin-gatsby-cloud at the README.

babel-preset-gatsby now accepts reactImportSource which is passed to the underlying @babel/preset-react importSource field. Note that this field is only supported when reactRuntime is automatic. It is classic by default.

The plugin is deprecated. It is not compatible with Gatsby v3.

When using the tableOfContents functionality, the defaults have changed. absolute now defaults to false, and pathToSlugField defaults to an empty string.

ScrollContainer, previously deprecated, has now been removed. Please use the useScrollRestoration hook instead.